Hopefully I have broken the bad luck series I have been in the past two years; not only I managed to read all the books I planned to, I even manage to more or less explode my challenge with 65 books out of 35 \o/. What happened? Better work conditions with my new position and a new house might just have been what I needed so I could find more time for reading…

Our friends at Goodreads have done some nicely presented stats here and this article will go in more details than just stats :)

As always, a mix of re-reading books I like and new authors & series and some disappointements as well, nothing is perfect…

A long time ago, I got a RIPE Atlas probe from a friend of mine — who does not know Stéphane Bortzmeyer?. For those who don’t know, these probes creates a big friendly botnet that enables all users — including you, whether you have one or not — to create “measurements” on the global Internet.

Measurements are used today to (guess what) measure things like DNS queries, network latencies and more. Having a probe enables you to participate by submitting your own network data. The more probes there are, the better. It has been frequently used on the past to find out about DNS censorship like here, here or here.

How does it work? The probes have a set of builtin measurements that get sent regularely to the RIPE servers and there is an API available to make queries out of these probes. There is of course an official tool available but it is in Python. While I could just use it, I do not like Python.

Various tools are available in different languages as well here.

As a Golang fan, I’ve tried to use these and was never satisfied. Either the CLI sucks or the tool had too many dependencies or something else. So you can guess, I had to write one myself. That was also an excuse to play a bit more with Go as a language :)

And today, I released version 0.21 of my so called ripe-atlas tool. After (way too many) commits, changes and test-by-errors, it is now usable.

You may remember these articles I posted a while ago in the “howtos” category on my website. I had two of them on my ZFS-on-root setup, one on FreeBSD 8.2 for a local machine and one for a remotely managed server on FreeBSD 9.2.

The most important one was the latter as I moved all my services on dedicated servers hosted in datacentres (all managed by Online1).

My most heavily used machine at Online is getting old now by today’s standards and, to stay within the scope of the aforementioned articles, lacking the cryptographic hardware extensions in its CPU (an Intel Xeon L3426 — as you can see, old :)).

While I was just running my web & mail site out of it, I do not really need blazing fast disks (or I’d have taken SSD) but still, now that I’m sharing stuff with the Transmission P2P client and building my own set of FreeBSD packages for the host and its jails with Poudriere, the bandwidth limitation is taking its toll (35 MB/s without the AES-NI instructions vs 150 MB/s).

I may also running out of disks space (ahem), the disks are 90% filled…

Minor upgrade for Calife, now at 3.0.6. Some cleanup & refactoring of the code. Better diagnostics when fork(2) fails. New header file to have better declarations like for die(), courtesy of Bertrand Petit.

It is available on my Bitbucket and Gibhub repositories. There is a fingerprints file signed with my GPG key. Please, check the signature before using the files. BTW, the GPG key is here

It is now-ish in the FreeBSD ports tree.

I planned reading a bit more than 2015 (goal was 48) and I managed… 30. A freaking disaster. I was mostly unable to read during the first half of 2016, too many issues at work and in my personal life.

See for yourself: the 2016 challenge

The last day of BSDCan is always special: all talks start at 10AM instead of the usual 9AM to account for the preceding night, generally filled with beer and food for some reasons :) It is also when the famous auction is taking place. During the closing session, Dan will auction a few items and the money given to the Ottawa Mission charity. He does that also with PGcon, the equivalent of BSDCan for Postgresql. 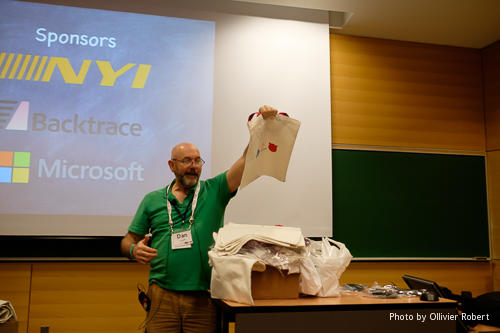 But for now, the talks!

Dan officially opened the conference as usual, under supervision by Groff of course, now a regular attendee of all conferences :) 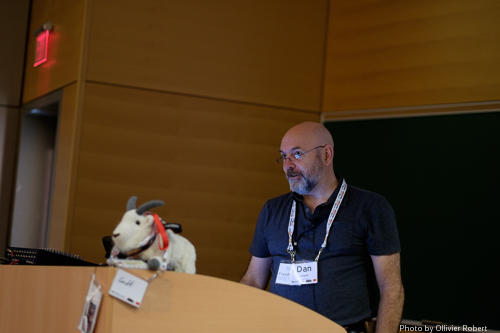 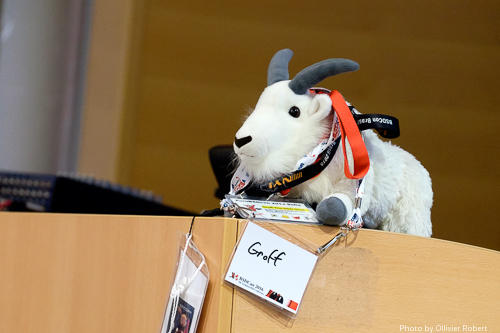 Second day of the devsummit at BSDCan. One very important session on the morning, the one about what was finally put into upcoming 11-RELEASE and what we want to have (or at least try to) for release 12.0. See below.

As usual, we will have two days of both tutorials and FreeBSD devsummit, a regular event in almost all BSD-related conferences now.