This is a Followup on the previous article 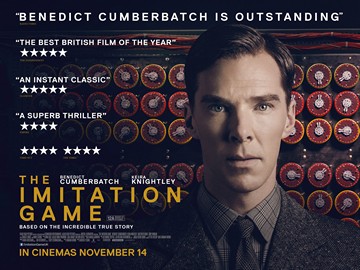 Mild spoilers below, do not read if you intend to watch it :)

I did not expect any actual technical details and indeed the movie is really light on this, most of the stuff is concentrated on the machine itself which they decided to call “Christopher” for some obscure reason (obscure in the sense that it is clearly related to the guy he was in love with in college but that does not match history — the machine was called Bombe to reflect on its evolution from the device the Poles created to crack Enigma back in 1933 [Kahn 1996]).

It is obviously to push a bit more the background on Turing’s homosexuality by relating to events before Bletchley Park. Seriously, I’m not sure it does add to the scenario and it is a bit too melodramatic to my taste.

The politics with Denniston, his hostility toward Turing and the way the latter went over him to Churchill and what goes from there are also slightly too much, but it is only slightly modified from history as seen on the WP page. Let’s say that it justifies the role of Charles Dance who is as good as the villain he always seems to be (witness his performance on the Game of Thrones HBO show :)).

It is already known that the romance between Joan Clarke and Turing is exagerated but to my surprise, it is not as awkward as it could be and more or less matches history as we know it — note 15.

Benedict Cumberbatch is really outstanding as Alan Turing (although Keira Knightley in her role as Joan Clarke with all her stubborness, is very good but it is not in the same league). All the questions on himself, his genius and his homosexuality are nicely played, it is entirely believable.

I guess I could have done without the russian spy part too but it does not hurt. I did not mind the part where a convoy destined to be destroyed is not warned as it would alert the Germans (“my brother is on that ship” and “you are not God to decide who lives and who dies” ) because it is not only logical but a necessity during war time. The Americans did wonder about the same thing during the same war with Yamamoto’s raid and his subsequent death (they decided that killing him was worth the bargain though [KAHN 1996]).

For me, there are many things missing or that could have been presented differently like more technical details about the machine and why that one was critical — they do not say that the regular Enigma was broken years before; the soviet spy is given a bigger role than in reality and so forth. Ultra is not really described at all, just mentioned.

All in all, a nice movie, very enjoyable and a nice way to explain the role of Turing during the war and the effect he had later in the fields of mathematics and modern computing. Just do not look too hard for details beneath :)